Sunshine and warm weather are well under way, and this month’s Photo of the Month comes from a collection of spring-themed photos taken in Chapel Hill. If you think this flower POTM is impressive, check out the hungry baby bird from the same set. 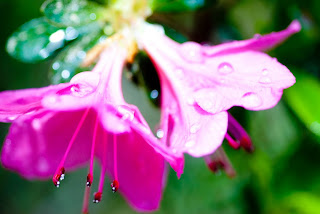 A recent portrait session involved the help of the youngest Fay Family member, Pat, who has been a drummer in the East Carolina University Marching Pirates band during his freshman and sophomore years. The shoot allowed James and Adam a chance to try some techniques which would be too difficult for a lone photographer to pull off: blacklights, strobe lighting with gels, and use of a fish eye lens. They succeeded in making Pat appear both intimidating and cool at the same time. He is, indeed, a multi-faceted subject.

Other highlights from the past month: Adam went backstage at a Carolina Chocolate Drops show to catch some behind-the-scenes shots of the band and got to meet Dolph Ramseur, the founder of Ramseur Records, which features bands like the Avett Brothers, Bombadil and Everybodyfields (in pictures: the guy with gray hair). Adam had always heard Dolph was a nice guy, and the stories proved true as he said, “You must be Adam Hajnos. You know, one of my favorite pictures is the one you took of Stuart from Bombadil.” Talk about a confidence booster!

James can now count himself among the many who have witnessed the over 300-year-old mystery of the Brown Mountain Lights, a supposedly supernatural phenomenon manifested by floating orbs of light around Brown Mountain. There are many myths surrounding the lights; perhaps they are lanterns held by the spirits of Cherokee women searching for their husbands, who died in the battle between Cherokee and Catawba. The most famous is the legend of the ghost of a devoted slave, looking for his master in the night. There is even a bluegrass tune about it. James was able to capture the haunted feel of the region in his ethereal photos, though there’s no rational explanation for the floating orbs he and his friends saw. Check out an old video of the orbs here.

That's it for this month. Thank you for your support!


-The FR guys
Posted by FlyingRooster Photopgrahy at 5:51 AM No comments:

FlyingRooster Photopgrahy
FlyingRooster is a photography venture based in North Carolina, composed of a duo of photographers. Lifelong friends Adam Hajnos and James Fay dreamed up the idea while passing a farm on the way back from shooting photos at the Bristol Rhythm and Roots festival. Adam attended the NC School of Communication Arts where he earned an Associates degree in Digital Media and won the 2008 Student ADDY Gold Award. James attended Appalachian State where he earned a Bachelor's degree in Marketing and worked as a staff photographer for The Appalachian newspaper. Please feel free to contact via the e-mail link listed on the profile page.